(CNN)If you're unlucky enough to have a poisonous snake sink its fangs into you, your best hope is an antivenom, which has been made in the same way since Victorian times.

It involves milking snake venom by hand and injecting it into horses or other animals in small doses to evoke an immune response. The animal's blood is drawn and purified to obtain antibodies that act against the venom.

Producing antivenom in this way can get messy, not to mention dangerous. The process is error prone, laborious and the finished serum can result in serious side effects.

Experts have long called for better ways to treat snake bites, which kill some 200 people a day.

Now -- finally -- scientists are applying stem cell research and genome mappingto this long-ignored field of research. They hope it will bring antivenom production into the 21st Century and ultimately save thousands, if not hundreds of thousands, of lives each year.

Researchers in the Netherlands have created venom-producing glands from the Cape Coral Snake and eight other snake species in the lab, using stem cells. The toxins produced by the miniature 3-D replicas of snake glands are all but identical to the snake's venom, the team announced Thursday.

In a parallel breakthrough, scientists in India have sequenced the genome of the Indian cobra, one of the country's "big four" snakes that are responsible for most of the 50,000 snakebite deaths India sees a year.

"They've really moved the game on," said Nick Cammack, head of the snakebite team at UK medical research charity Wellcome. "These are massive developments because it's bringing 2020 science into a field that's been neglected."

From cancer to snake venom

Hans Clevers, the principal investigator at the Hubrecht Institute for Developmental Biology and Stem Cell Research in Utrecht, never expected to be using his lab to make snake venom.

A decade ago, he invented the technique to make human organoids -- miniature organs made from the stem cells of individual patients. They've allowed doctors to test the specific effects of drugs safely outside the body, something that has revolutionized and personalized areas such as cancer treatment. 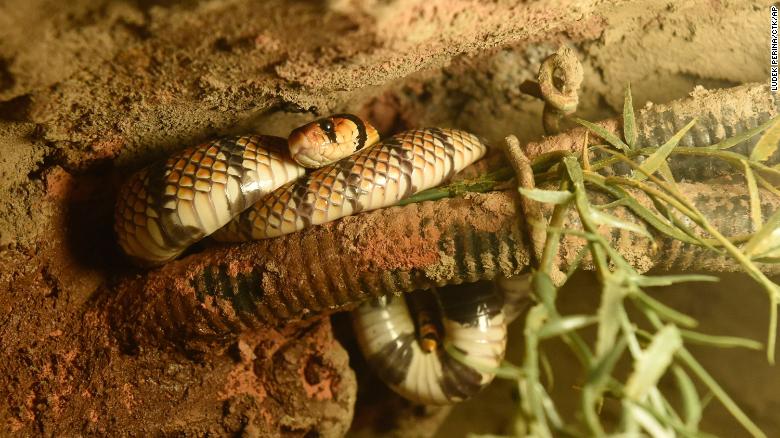 The scientists have reproduced the venom gland of the Cape coral snake, seen here in the Olomouc Zoo, Czech Republic, on May 11, 2018.

So why did he decide to culture a snake venom gland?

Clevers said it was essentially a whim of three PhD students working in his lab who'd grown bored of reproducing mouse and human kidneys, livers and guts. "I think they sat down and asked themselves what is the most iconic animal we can culture? Not human or mouse. They said it's got to be the snake. The snake venom gland."

"They assumed that snakes would have stem cells the same way mice and humans have stems cells but nobody had ever investigated this," said Clevers.

After sourcing some fertilized snake eggs from a dealer, the researchers found they were able to take a tiny chunk of snake tissue, containing stem cells, and nurture it in a dish with the same growth factor they used for human organoids -- albeit at a lower temperature -- to create the venom glands. And they found that these snake organoids -- tiny balls just one millimeter wide -- produced the same toxins as the snake venom. 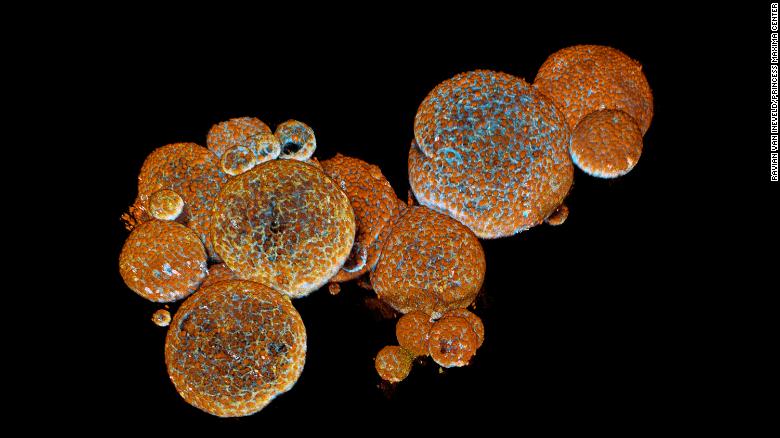 The snake venom gland organoids as seen under a microscope./

"Open them up and you have a lot of venom. As far as we can tell, it's identical. We've compared it directly to the venom from the same species of snake and we find the exact same components," said Clevers, who was an author of the paper that published in the journal Cell last week.

The team compared their lab-made venom with the real thing at the genetic level and in terms of function, finding that muscle cells stopped firing when exposed to their synthetic venom. 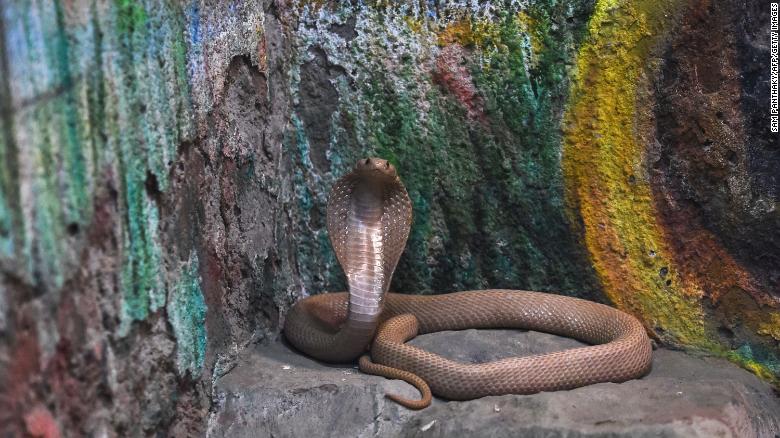 A venomous spectacled cobra, also known as Indian cobra (Naja Naja) or white cobra, is seen near a painting inside its enclosure at the Kamla Nehru Zoological Garden in Ahmedabad on January 30, 2019.

Cells and DNA, not horses

The current antivenoms available to us, produced in horses not humans, trigger relatively high rates of adverse reactions, which can be mild, like rash and itch, or more serious, like anaphylaxis. It's also expensive stuff. Wellcome estimate that one vial of antivenom costs $160, and a full course usually requires multiple vials.

Even if the people who need it can afford it -- most snakebite victims live in rural Asia and Africa -- the world has less than half of the antivenom stock it needs, according to Wellcome. Plus antivenoms have been developed for only around 60% of the world's venomous snakes.

In this context, the new research could have far-reaching consequences, allowing scientists to create a biobank of snake gland organoids from the 600 or so venomous snake species that could be used to produce limitless amounts of snake venom in a lab, said Clevers.

"The next step is to take all that knowledge and start investigating new antivenoms that take a more molecular approach," said Clevers.

To create an antivenom, genetic information and organoid technology could be used to make the specific venom components that cause the most harm -- and from them produce monoclonal antibodies, which mimic the body's immune system, to fight the venom, a method already used in immunotherapy treatments for cancer and other diseases.

"It's a great new way to work with venom in terms of developing new treatments and developing antivenom. Snakes are very difficult to look after," Cammack said, who was not involved with the research.

Clevers said his lab now plans to make venom gland organoids from the world's 50 most venomous animals and they will share this biobank with researchers worldwide. At the moment, Clevers said they are able to produce the organoids at a rate of one a week.

But producing antivenom is not an area that pharmaceutical companies have traditionally been keen to invest in, Clevers said

Venom is a complex cocktail

One challenge to making synthetic antivenom is the sheer complexity of how a snake disables its prey. Its venom contains several different components that have different effects.

Researchers in India have sequenced the genome of the Indian Cobra, in an attempt to decode the venom.

Published in the journal Nature Genetics earlier this month, it's the most complete snake genome assembled and contains the genetic recipe for the snake venom, establishing the link between the snake's toxins and the genes that encode them. It's not a straightforward cocktail -- the team identified 19 genes out of 139 toxin genes as the ones responsible for causing harm in humans.

"It's the first time a very medically important snake has been mapped in such detail," said Somasekar Seshagiri, president of SciGenom Research Foundation, a nonprofit research center in India.

"It creates the blueprint of the snake and helps us get the information from the venom glands." Next, his team will map the genomes of the saw-scaled viper, the common krait and the Russell's viper -- the rest of India's "big four." This could help make antivenom from the glands as it will be easier to identify the right proteins.

In tandem, both breakthroughs will also make it easier to discover whether some of the potent molecules contained in snake venom are themselves worth prospecting as drugs -- allowing snakes to make their mark on human health in a different way to how nature intended -- by saving lives.

Snake venom has been used to make drugs that treat hypertension (abnormally high blood pressure) and heart conditions such as angina.

"As well as being scary, venom is amazingly useful," Seshagari said.

The number of older people getting coronavirus in Europe is rising again. That&#039;s really bad news

Too much candy: Man dies from eating bags of black licorice